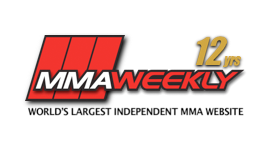 No one likes a sore loser. Unfortunately, the world is filled with them. But former UFC lightweight champion Benson Henderson isn’t one.

Henderson was finished by strikes for the first time in his eight-year professional mixed martial arts career by Rafael dos Anjos during the UFC Fight Night 49 main event in Tulsa on Aug. 23. After being stunned and hit with a flying knee, Henderson tried to work his way back to his feet along the cage after a failed takedown attempt. Dos Anjos met him with a left hand that made the former titleholder’s body go limp and crumble to the canvas.

Dos Anjos followed him to the ground and was in finish-mode when referee “Big” John McCarthy intervened and stopped the fight. After getting to his feet, Henderson was visibly unhappy with the referee’s decision to stop the action.

“I thought I was clear-headed. It is what it is. You have the ups and downs. You have to take the good with the bad,” said Henderson immediately following the upset loss.

Prior to the event’s post-fight press conference, Henderson was able to see the footage of the finish.

“I got to catch a couple of replays before they stopped it, the backroom broadcast,” said the 30-year-old former champion. “It pretty much confirmed everything I said inside the cage.

“I went to latch onto a single-leg, turn, push him up against the cage, hopefully take a couple of shots to the back of head and let the cobwebs clear a little bit and take some time and start working from there,” he explained.

“As soon as I started to come around and go into the single-leg, Big John did his job.”

Henderson made no excuses. He didn’t ridicule the legendary referee for the split-second decision to stop the fight. He accepted it like a champion does, despite thinking that it was an early stoppage.