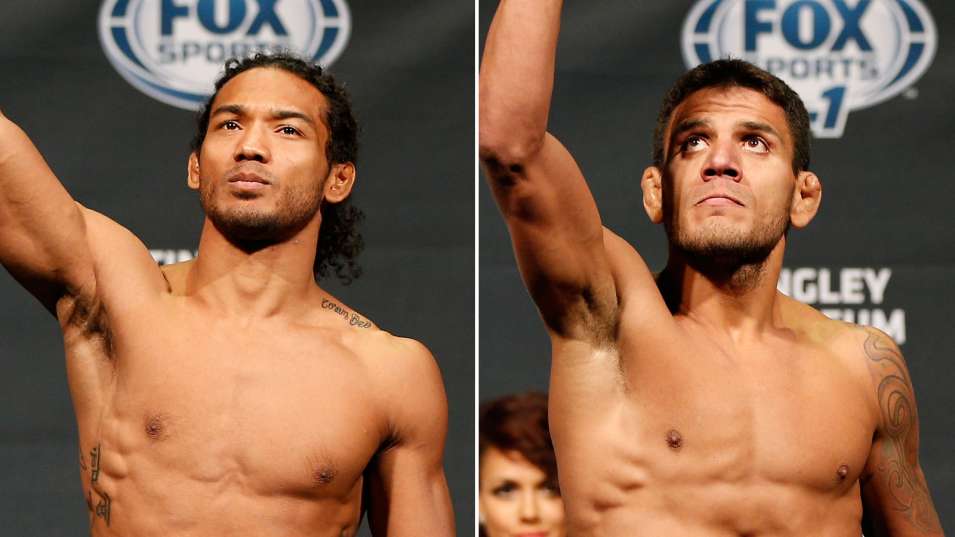 For the first time ever, the UFC will land in Tulsa, Oklahoma for the UFC Fight Night on FOX Sports 1 card featuring former UFC lightweight champion Benson Henderson in the main event as he looks for his third win in a row while taking on top five ranked fighter Rafael dos Anjos in a pivotal matchup at 155 pounds.

With champion Anthony Pettis and top contender Gilbert Melendez tied up until December, a win for Henderson on Saturday night is crucial if he hopes to get back in the title race following the next bout for the belt later this year.

Also on the card, Mike Pyle looks to rally behind his last fight where he TKO'd TJ Waldberger as he faces Canadian knockout artist Jordan Mein.  Both fighters are looking to climb the welterweight ladder, and a win on Saturday would go a long way towards putting one of them in the top 10.

To make sure you catch all the action from Tulsa, we're giving you a viewing guide for the entire week's events from the weigh-ins until the event is over.

To officially kick off the fight weekend, get ready to see all the fighters hit the scale before staring down just 24 hours away from the show.  The weigh-ins can often times tell the tale before the fights on Saturday night so this is a great way to see who has the edge before even stepping foot in the cage.

Before the fights kick off at the bottom of the hour, hear analysis and picks from the best crew in the sport.  The team from FOX will give insight and break down the entire card and give their selections on who they believe will come out on top including the main event between Benson Henderson and Rafael dos Anjos

Where to watch: UFC Fight Pass

The first fight of the night will kick off on the UFC's digital network, Fight Pass, featuring bantamweights Wilson Reis and newcomer Joby Sanchez before the action moves to FOX Sports 2 for the rest of the prelim card.

The first four fights of the night will kick off on FOX Sports 2 and there are some incredible matchups in this lineup including the return of UFC favorite Ben Saunders, who comes back to the Octagon after a few years away fighting in other organizations.  The four fight card includes:

Following the night's action, don't change the channel because to hear a breakdown of all the events that just happened as well as exclusive post fight interviews with the biggest winners of the night, keep it locked to FOX Sports 1 with the special UFC post fight show during FOX Sports Live.