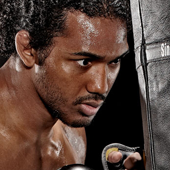 As you guys may or may not have heard, I'll be back at it inside that octagon on April 4th, 2015 at the Patriots Center in Fairfax, Virginia. I'll be squaring off against Jorge Masvidal.

I asked Joe Silva to fight as soon as possible and he obliged by allowing me to step in for Bobby Green. I'm pretty disappointed with the way the last two outings in the octagon ended, one being stopped by the referee and the last one being a decision that didn't go my way. I don't make excuses or place the blame on anyone else, it's me in there performing and I need to perform better. Whatever it is it takes, I need to do that. If it takes me taking my opponent down and laying on top of him for the entirety of the fight, I can do that. If it takes me punching my opponent in the left pectoral muscle exclusively, I can do that. Whatever it takes, I feel like I am good enough to do it. All that being said, I'm pretty upset and I'm going to let that frustration release in Fairfax.

The Once And Future King