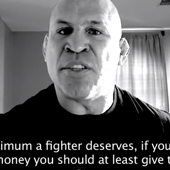 I know this Wanderlei Silva video is going to be all sorts of controversial, I'll dare say that a lot of fighters won't even bring it up or want to talk about it in fear of a reprisal. Not a written up note or anything as overt as that but lets be realistic, it's not exactly a smart idea to publicly speak bad of your employer.

I wanted to actually write up a much longer piece on Wanderlei Silva's video but I'll let it speak for itself. (If nothing else it's one heck of a highlight video from a man who had a 20-year, legendary career). #WarWand.

RT @LFAfighting: The Ladies of @TheMMALab are ready to rock! 🔥🔥🔥 #MariaHenderson and #LeslieHernandez are both in action at #LFA131. 💥 TO…
Follow Benson on Twitter